In Zelenogradsk I first time in my life saw a house with four entrances. All of them were different and among shabby half-painted walls were very pictorial. I sat in a tiny courtyard in front of them, and the work on the study made me come here three days more. It turned out that each door led to its own flat. The biggest interest my appearance and my business aroused in boys, living in the house. They looked like they all were around five or six years. They used to spend the most of the day in courtyard, and their mothers cried to them, called them back home, or scolded them.

At plein air I often had to answer to children of the same age on the question “What are you doing?” It can be placed on the first place by the popularity, and the second place is taken by “What are you drawing?” The boys of this courtyard were not an exception. And, to be honest, both questions confounded me in the past. I thought: “Why, isn’t it clear what I am doing?” Now I think that, probably, some little children, even the drawing ones, completely  lack a notion that one can paint from nature, especially the ordinary doors, and to do it by such, from their view, whimsical way.

The boys made an interrogation for me. They pointed by the fingers to all of my instruments and asked: “What’s this?” And I answered as it is, couldn’t see by their reaction, do they understand anything from my answers or not.

After a couple of days, when the picture began to fill with color and details, the boys began to identify in it “Dima’s house” – so they called the door behind which one of them lived.

On the fourth day of work I felt myself as I live in a shared house. The tenants finally get accustomed to my presence. For these four days I became an unintentional witness of their life. 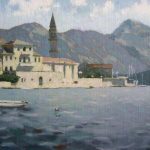