Remnants of the German architecture in the Kaliningrad region stand out by their peculiar color, formed by the variety of red color tints. The abundance of red combined with cloudy Kaliningrad’s weather creates heavy, pressing union.

The work on this study was followed by another abundance – abundance of encounters with local population.

A man, around thirty, by his “eye of an artist” estimated my artwork positively. Pointing on the study, he notified me, that he specializes on portraits and does not draw such still lives.

Later two adorned with tattoos gentlemen in sunglasses approached me from the local jail side. One of them, standing at the right from me, pushed his glasses to his forehead and started to watch intently the painting. The second one, standing to the left from me without lifting his sunglasses, was focused on the palette and proclaimed his delight from what he sees. The standing at the right gentleman pointed out to his friend that he looks in the wrong direction. The friend raised his head and was delighted even more. 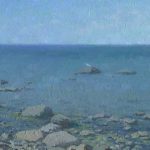 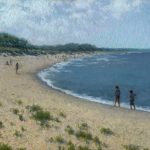