It was a drowsy early morning. With the painter’s cases on our backs we were climbing up the rocky hillock, searching for a good view. Step by step the dense crowns of the trees become lower, gradually opening the view, until on the top of the hill the stately mountains revealed themselves to us.

The sky was chaotically filled with scraps of soaring lowly rainfall clouds. The thin veil on the horizon softly dissolved the rays of the rising sun, giving a golden tint to the sky. In some places dark clouds, smeared at the bottom by the rain spilling out, flew over it. The mountains lined up as deep theatrical decorations in front of us. Their tops were outlined as cold silhouettes against the background of the golden sky in one part and were losing their edges because of the rain in another.

Immersed in painting the mountains, I didn’t notice that it had started to drizzle until drops began to fall on the canvas. The bushes and the grass on the hills began to fill with moisture and darken. Soon the rain came on stronger and prevented any further work. We had to pack away our things and to wait for the bus, hiding under the umbrellas and branches. We returned to our camp for dinner. Soon after this the clouds cleared away and the typical sunny weather came back to Bakhchisarai.

The study remained unfinished. But the major part of work was done, so it was easy to finish it back in Moscow without the natural surroundings. What I found most valuable about the study was that I managed to convey the depth of the stretching mountains and the combination of golden sky, blue distances and grey slopes on the foreground, covered by colored spots of plants. The desire to convey these effects more precisely and strengthen them pushed me to paint the big artwork. Already working on it, I’ve decided not only to give attention to the depth of the space and color, but also to the feeling of that awakening after a dull dream of the Crimea. 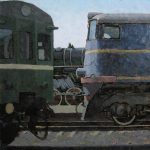 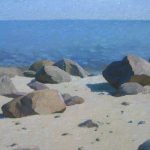