The water tower is a symbol of Svetlogorsk (Rauschen). It was built in 1907-1908. Its author is one of the leading architects of Königsberg, Otto Walter Kukkuk.

The tower is part of a complex of Warm baths (mud baths). The complex was designed for taking therapeutic baths and bathing in sea water for people who found it difficult to go down to the sea. At the beginning of the 20th century, there were baths, a bath with heated sea water, mud baths, carbon dioxide baths, a solarium, and a massage room. There was an observation deck on the water tower. It still has old German windows. And the steam generator in the therapeutic mud preparation hall has been working since 1908!

Now the complex of buildings belongs to a sanatorium of the Ministry of Defence, and the water and mud treatment center works for its intended purpose. However, the structures of the buildings are in disrepair and have long required restoration. But for some reason, it is not carried out.

Local concerned residents from the Public space “Telegraph” decided to pay attention to this by organizing a plein air and an exhibition. And at the invitation of Natalia @screamroad, I was among the participants. The result of the plein air was this work. 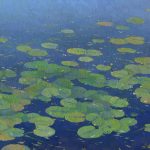 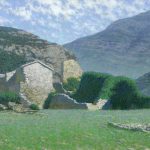 Landscape > Painting “The ruins of Bar”Available for purchase, Landscapes