The first spring study of this year. Right in such deceptive weather when it seems that it’s already warm but after four hours of sitting you get so frozen that you need to warm up for a very-very long time after. Not every trip for the study is accompanied by a cheerful and merry mood.

I had wanted to paint the trains from this point already for four years after the first effort, which proved unsuccessful. Nothing had changed since this time, except the new inhabitant – the machine at the left. But, as it was four years ago, the blue locomotive attracted most of my attention.

I knew the subject quite well, but up until the last moment I didn’t know how to design it. There were two options: to paint it bright and strictly or as it looks now. If the sky was clear and blue I would make it strictly ceremonial. It would be mainly done in blue coloring. But the weather wasn’t good and nor was my mood, so with the great pleasure I let the paint to behave itself as it wanted. 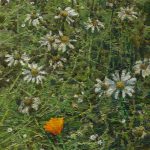 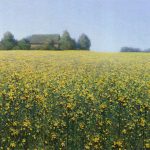