Yura, an acquaintance of my teacher Alexey Nikolayevich Timoshenko, was helping us in our journey in Montenegro. He is one of the noblest and most modest men I ever met. Yura is Serbian, he doesn’t speak Russian. And Alexey Nikolayevich speaks Russian, Ukraine and Czech, but doesn’t speak Serbian. Non the less, it didn’t hinder them to understand each other without difficulties and to communicate perfectly. How they did it still is a question for me.

Yura met us at the airport, accompanied us whole our journey, drove us to show the most beautiful places of Montenegro. He was pleased from our rapture of the beauty of his country. One day Yura decided to take us to the river of Crnojevic.

An hour and a half went by the mountain roads and we already see the mountains of Albany and Lake Scadar. A little more time and we were at the place. We went out of the car, came to the river. Its transparent water reflects the world as a mirror. There are boats near the stone riverbank, which are shaped as half-moon, and the white swans are swimming by the mirror-like surface. The old houses are raised by poling. The stone bridges bear the mark of the time. Here everything forms a harmonious world. Objects created by people “merge” with the natural landscape and do not infringe it essence at all.

Alexey Nikolayevich had chosen the subject, Yura left for his business till the evening and we were absorbed in the work, which we spent the whole day doing. After noon an artist with the mustaches like the Salvador Dali’s one placed with the giant canvas nearby. He quickly and boldly painted something on his canvas with a palette knife and then he left away. Around evening a woman approached to us, who was speaking perfectly in Russian, and suggested that we have dinner with her, just in one of the ancient houses we were painting. She happened to be their owner and, at the same time, an artist! As a matter of fact, in Montenegro we met artists almost every day and practically everywhere.

We ascended to the balcony on the second floor, which had a view on the river. The lady of the house served hot fish dishes, which couldn’t help make us happy after tiring work. After a while a senior couple came upstairs and we entered in a conversation. It turned out that they were  English, travelling around the world and drawing their impressions. They’ve decided to stay at night in this house and had already got acquainted with the owner. Lady, admiring their drawings, asked them to show their sketchbooks. The senior lady from the England opened the sketchbook with the skillfully made watercolor drawings of the views of Montenegro. Each drawing was accompanied on the neighbor page with the calligraphic notes, which made a sketchbook a whole story of their journey.

We talked all evening with our new friends sharing the impressions of what we had recently seen till Yura came. We “embarked” in his old auto and set off to the home. Curving by the mountain roads was rocking to sleep while outside the window were sparkling the summer lightning. 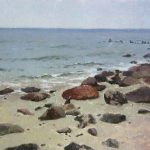