Embraces of the Bulgarian Sun

I am a man from Moscow, quite unaccustomed to the July heat in Bulgaria, and working in the middle of the day outside in the south climate is something special for me. It is the time when you can not only see the difference between countries, but also physically feel the differences in their beings. In Moscow, for example, the whole winter has round-the-clock twilight that urges you to be dormant. And when you come to a place where the sun is not just giving off light but also heat, you began to boil like a vigorous kettle. It seems for me that it clearly expresses the differences of the mentalities of southern and northern countries.

For five days in a small coastal town in Bulgaria I had been taking the easel and the umbrella after  dinner and going to the narrow yard with an abandoned building with pillars and small wooden houses. In the center of the yard amidst burnt out grass a high cypress was growing. A shadow was falling from it, moving on the ground as on a sundial. In that shadow I found a sanctuary from the sun. To sit just under the umbrella was hard: the sun began to burn.

The wooden houses, which for many years had been grilling in that yard, looked like scorching baked logs. The black, abrupt shadows, erasing each object they could reach, were slipping up their walls. Between the houses the tenants were drying their laundry on the taut strand.

The yard was imperceptible for people, surrounded by a hedge from three sides. Only rare observant passersby and tenants came up to me. They mostly didn’t have the slightest doubt if I could understand them. However I do not know Bulgarian and could hardly understand anything. Attentively listening to them, I noticed some similarities in languages so some words became understandable.

One tenant, a young Turk, came up to me every day to inquire how the work was going. When the work on the study was near completion, he pointed to the image of the green towel and said that it was wrong. Then he pointed to the white towel and said that this was correct: “White means a man and instead of the green it should be red, because red is a woman”. After this I changed the color.

Calm afternoon work in the yard assembled experienced warm embraces of the evening beach and the morning observations and thoughts, creating not just an image of the piece of visible world, but the image of my whole short, bright Bulgarian life. 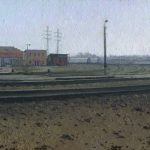 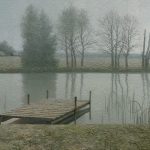