Once we were painting studies in the giant forest, which is called Elk Island National Park. It is situated within Moscow’s territory, occupying a big part of it, and goes far beyond its borders. One can really meet elks there, even in the part which is inside Moscow. And the forest is something like a small village in its scope, with its own yard and the “bird’s garden” where injured birds are nursed.

This was the fifth hour of work.

From one of the paths a woman turned to us.

“How long have you been painting that?”

“Studies can’t be painted like this! For a study, two hours should be spent at most!”  declared the woman, and proudly went away.

I do not remember how much time I spent on this work, but the longest painting which I made in one session took me around eleven hours. The quickest was around two and a half hours, and in those two cases I set myself completely different tasks. It has been five years since painting this work and I still don’t understand why one should paint studies within two hours. Probably because the light is changing, but it changes even in two hours, so in any case one needs to paint partly “by impression”! 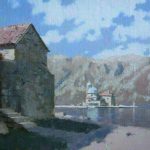 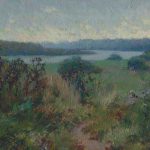