Our Lady of the Rocks island (Gospa od Skrpjela island)

When we were at our second journey in Montenegro, we met artists every day, since the airport in Moscow, mostly the Russian speaking ones. Probably, the most interesting episode is connected with this study. We were painting it from the St. George island shore at our second or fourth day at Montenegro. The island of the St. George is as small as the island Our Lady of the Rocks and, except the abandoned abbey, there is no attractive sights for tourists, so nobody was there. We made a settlement with local boatman that for the small fee he would take us to the island and then take us back. In complete solitude we were finishing our work on the study when the water near the island suddenly boiled up and something big, black and shiny emerged for a moment from the water. We exchanged glances in bewilderment.

All of a sudden, after less than a minute, the water boiled again and the black creature again emerged from the water. Imagine how surprised we were when in the black silhouette we finally recognized the diver in wetsuit with the harpoon in his hand!

The diver, just as if nothing has happened, staying in the water, removed the mask and said in Russian: “Hello! I am an artist from Saint Petersburg.”

P.s. Saint Petersburg is one of the two biggest cities in Russia. 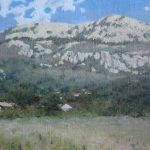 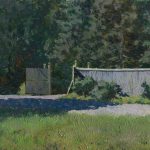