Before every journey I usually examine the map in search of the places which are obligatory to visit. However more than this, I just like to travel by virtual maps: to look on the photos of the different countries and to dream about going there. My main goal of the journey to the Kaliningrad region (which is a Russian region in Northern Europe) became Vistula Spit, which attracted me by the abandoned airdrome and fort.

There was no road by land to the Spit but every two hours the ferry set off from Baltyisk. I already knew the schedule while in Moscow but before embarking on the ferry I had to travel to Baltyisk by bus. The timing of the bus didn’t fit with the ferry’s schedule and I was lucky that I found a boatman who, for a small price, helped me with his motorboat.

First upon arriving at the Spit I went in the direction where I imagined the fort would be. I came to the walls of the fort and saw the cows pasturing near the walls. Then I ascended the hill near the seashore formed by the walls and my dream came true. In the background of the blue and gray water, the red and pink bricks lined the ruins stretched to the horizon lit by sunshine. The spots of colors of water, brick walls, roofs and sand created the pink-beige-blue coloring, and then they fell apart in the variety of tonal and color nuances! The silver lines of the breakwaters stretched into the distance and the shiningly white swans were swimming nearby. Here was my subject! I never supposed that I would make such effort as I spent on it later. But I also couldn’t refuse it.

I began to work. The bright and burning sun was shining in the sky, and from the side of the Baltic Sea a piercing wind was blowing . As I was in a sweater and jacket in the shadow of the umbrella I was freezing, but my hands that periodically were in the sunshine began to get sunburnt. I finished the session with some time remaining to visit another place of interest – Aerodrome Neutief.

The next day the work became more difficult as the wind became stronger, so from time to time I had to hold my painter’s case to keep it from flying away. I fastened my umbrella to the heavy bricks of the Fort which were scattered everywhere, but after a short while the spokes broke and I was left without the umbrella. In the end I finished the daily part of the job under the sun. I happened to see a big black bird on this day which spread its wings wide and posed on the breakwater. Later I learned that it was black cormorant.

I fixed the umbrella that evening but all the same I couldn’t use it the next day: the wind was blowing so hard that the umbrella kept falling, dragging the bricks over the grass. Somehow I finished the third session.

Only the fourth day went quite fortunately. The wind calmed down and gave me an opportunity to paint without thinking about flying brushes, pallete, umbrella and painter’s case.  I memorized the two big swans which flew over my head with a rustle. They appeared to be giant birds.

At the end of each session I went back by the ferry to the bus station. The ferry was filling with passengers and cars and sailed to the port under the burning sunshine from which I would hide in the narrow shadows if there was any empty place. 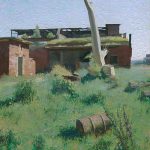