One of the main points of my journey over Kaliningrad region was the airbase Neutief at the Vistula Spit. The base was built in 1939. It was one of the most equipped bases of the Germany at that time. On it were based the ground-aviation and the hydro-aviation which were used in the battles of World War II till its capture in 1945 by the Soviet forces. The base was the last defensive line of Nazi in East Prussia. Here is a more detailed story of the base (the only article in English I found).

The base appeared before me as ruins of buildings. Some of the airplane sheds retained the remainders of round-headed windows from the thick reinforced glass. The navigation tower made of dark-red brick with the huge, likely forever, stopped clocks rose as a vertical dominant. Burnt structures of some of the buildings stuck up like black skeletons, soaking up light like a sponge.

The German architecture with its straight lines and dense red color was sharply contrasting with the green background. The concrete roadway of the airdrome had become overgrown with grass. It seemed that the plants tried to find any crack in the concrete and iron with special fury, following the sunlight, greedily taking up the space around when they found it. The cows were grazing amidst rusting iron, devouring this juicy green growth. The flocks of seeds, carried by the wind, were clinging to the grass. The life was ruling with rapture over that which once was used to destroy it. 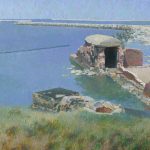