The bus delivered us right at the port. We descended to the quay using the road dotted with chicory and poppies. It was hot and stuffy. Sometimes the sun was gleaming through the shroud of the clouds. The sea, reflecting the muddy sky, was splashing, slightly rocking the boats densely painted with color. That morning I was neither wishing nor waiting for anything. I just came to paint the quay.

I took an elongated horizontal format and composed the landscape on the fourth attempt. I was soothing it, transforming the port into a long narrow line. I should place it so that the sea would solidly support it and the sky wouldn’t hang over with its weight. I was interested in everything that I could discern in this line but the details shouldn’t violate its calm. The lines on my canvas should become smooth like contours of the boats. The landscape should be made of nuances. The tonal and color transitions in the sky and the water should be barely perceptible. The difference between the sky and the water should be almost indiscernible. The coloring should be silver with grey, rather cold, restrained colors. 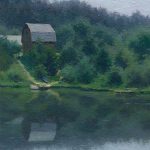 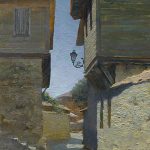