Material: hardboard
Technique: oil
Year: 2008
Painting status: This picture is in the holdings of Stroganov Moscow State Academy of Arts and Industry
When I was studying at Stroganov Moscow State Academy of Arts and Industry, we had painting classes. For all five years we painted only a couple of portraits and the rest of the time we were painting still lifes. Still lifes in Stroganovka are a special story.
Imagine: you come into a big, light classroom where six dull still lifes are standing by the walls stained with oil. One with an ochre-red background with a small plaster figurine, the second is with a plaster head with a blue background, and etc. You paint these still lifes during the year, than you come back to the classroom the next year and you see that the plaster figurine has moved from the ochre-red background to the blue background, and its place was taken by the plaster head. That’s all. Nothing had changed except this. And the same is the case with each still life. One bottle has switched places with the other bottle, the plastic pear replaced the plastic tomato, and all the backgrounds and draperies stayed in their places. From year to year, those still lifes were covered by dust and become duller.
Besides plaster figurines and plastic natural foods, it was popular to place a painted rolled sock instead of a pomegranate. Once I decided to examine a strange green vegetable in the still life. I moved closer and saw that it was a crumpled green paper! Such strange content of the still lifes, naturally, didn’t completely stimulate the desire to paint. That’s why when something interesting suddenly appeared in the classroom, like a colorful still life, it was like a miracle! It was swarmed by students all at the same time, arguing for a place, who settled so densely that they elbowed each other. It’s a pity that this happened rarely.
Related Projects
© Daniil Belov / contact@daniil-belov.com 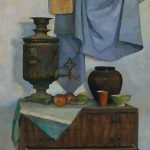 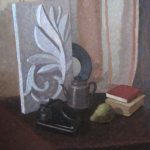