Shading, turns of form and the laws of lighting, part two

Video lesson: How and why light and shadow are formed on objects (shading and turns of form) – the laws of lighting, part two, summary:

2**In some cases the parts of an angular surface can give a reflection on each other, for example, when the light is lighting the inner surface of a form in the shape of “П”. Knowledge that light travels in straight lines and reflects from glossy surfaces with an angle equal to the angle of incidence (and scatters at many different angles from matte surfaces, depending on a particular surface’s characteristics), allows us to easily take this into account. Or simply observe it with your own eyes in nature.

4* But a turn of form is not always an edge. There are no edges on the hand, while there are breaks of form on it – places where the character of lighting is changed by the changes in the direction of the surface. So a turn of form can look smooth on smooth surfaces.

Essentially, the curved surfaces can be divided into many small flat surfaces, like a sphere can be modeled as a soccer ball with its pentagrams. If you do this, it will be clear why the shading on a curved surface is exactly like this. You can divide any surface like this.

5**
The from a light source is also important: the further from the source, the weaker the light is light from it. This creates a gradual gradient of tone from lighter to darker on a surface. This happens because the rays fly in every direction from the lamp bulb, and the light is “denser” closer to it. That is, if you form a ring with two fingers, it will catch more rays closer to the lamp. The Sun is very far from Earth so its rays are practically parallel. That’s why in the case of direct light from window or outdoors, there is no such effect.

5*** You should know that the areas of light, middle tone and core shadow very rarely have really sharp borders between them, so these are only conventional areas, just names. In real life there is usually only gradation from the lightest part to the darkest part of the object. This happens because the surfaces of the objects are smooth and at a microscopic scale they change their direction very gradually, so their tone changes gradually. That means that if we have a tone from middle tone and a tone from a shadow, there will always be an infinite number of intermediate tones between them, which will gradually get darker till it reaches the tone of the shade. If the tones are very similar, we can magnify it and see the intermediate tone. Just remember that the surface of the object gradually changes its direction. Generally, only a cube and such angular shapes have sharp borders of shadow and light.

The previous part is about shading 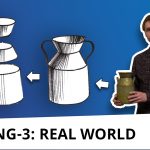 Laws of lighting in drawingLessons

What is shading? Examples of shading on the sphere, cylinder and cubeLessons